For as long as I can remember, the emerald Isle of Ireland has called to me. From the rolling green hills, to the lively reels, the folk lore and magic to the welcome of the people, I have called Eire, my homeland.

It seemed only fitting that my first post in the Tookish Travels room of Wanderwood Lane, include THE trip of my dreams.

It was the Fall of 2013 and my two best gal pals and I were getting itchy to travel. At this point, between the 3 of us, we had probably taken a dozen weekend getaway trips together and we were looking for something a bit bigger.

I threw out my dream of Ireland, a dream my gals were very familiar with, and being that they both wanted to be with me when I finally saw my “homeland”, the decision was easy. We gave ourselves about 6 months to prepare and it was on!!!

At this point in time, I had only been on a plane a few times but handled the long flight very well!

We flew overnight, so when we landed in Dublin, we got our rental car and away we went (oh yeah, my friend Ashley drove) 😉

Our first few hours in Ireland were spent watching the scenery go by from the window of our Jetta BUT I wouldn’t have had it any other way. A few miles outside of the city and the country opens up beautifully…and I didn’t have to keep my eyes on the road, so they were plastered to the scenery!

We pulled over for this view and it was the second, of many, times I was overcome with emotion. I was in the place I had loved from afar for so long and this view was one of the reasons why.

Back then I wasn’t a big a fan of long walks as I am now, but the first thing we did when we were out of the car for longer than a minute was walk the mile and half down to cross this famous rope bridge…Now, at the time, my undiagnosed anxiety threw a million curves at me on any given day and I remember wanting this trip to catch some of them.

This was a test, for sure!

Fun Fact: You can see a bit of Scotland from this side of the island! Pretty cool!

Once back across the bridge, we stopped in our first café and had what would become our late lunch of choice…the soup of the day, half a sandwich and a cup of tea.

From Carrick A Rede we drove on to one of the WONDERs of Ireland, Giant’s Causeway. 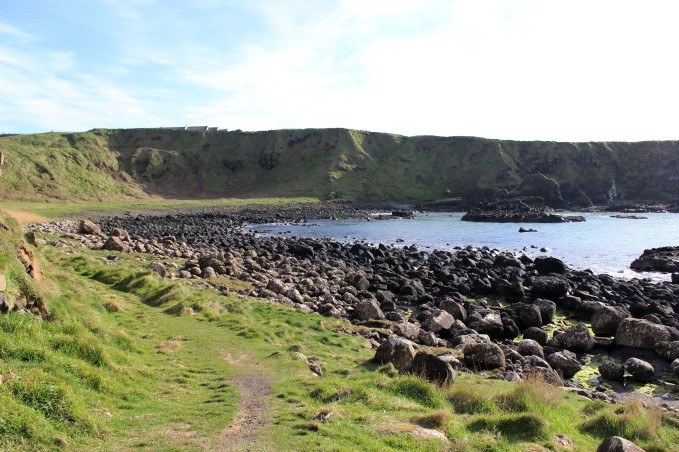 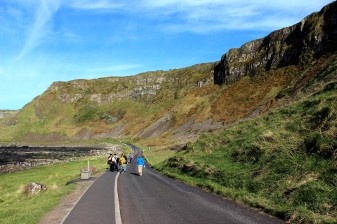 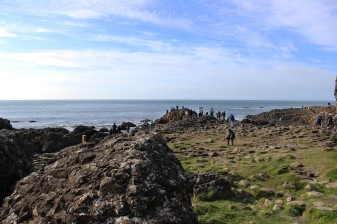 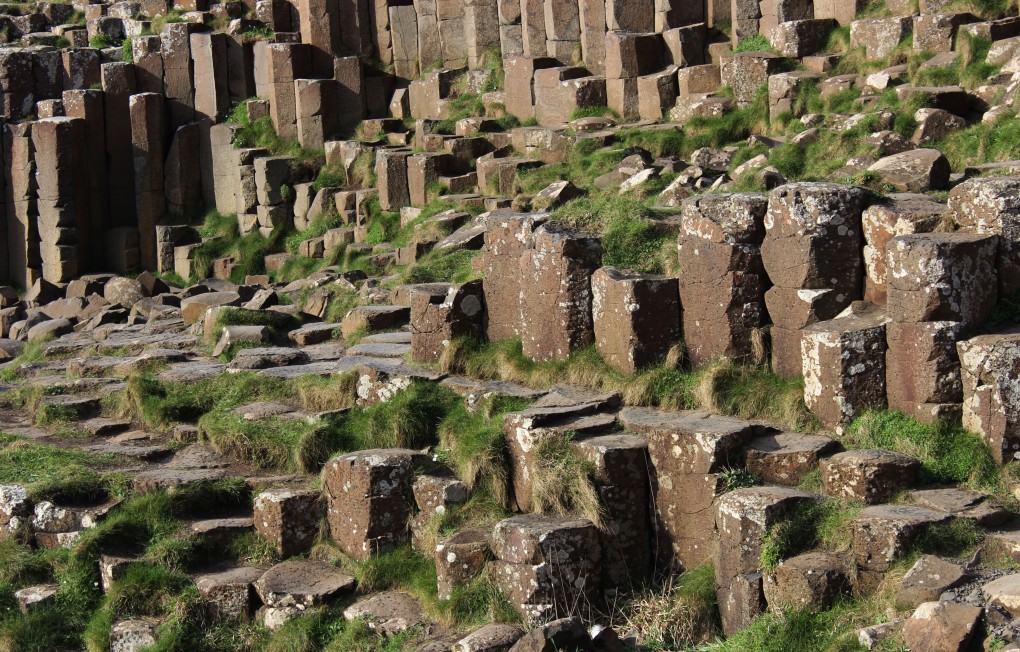 Awe had absolutely struck me at this point. Pulling up to this site is something you don’t even know you are doing. There is so much wide open, beautiful, countryside to see along the way, that sights like this become the icing on the cake!

We arrived in Portrush well after dinner time but found our B&B for the night without much trouble, had our first, SUPER tasty Guinness and fish/chips!! No photos, sadly, because it was so dark BUT we sat by the water and enjoyed gushing about our first day.

***thank goodness I still have my journal!!

The Irish breakfasts were easily a TOP favorite thing about the trip! My first morning meal was fresh fruit/juice/cheese followed by eggs/link sausage/bacon and coffee. It was delicious and filling (which would serve us very well budget wise, as we would find out).

One of the cool things about this trip was how loose our itinerary was. We planned first/last nights accommodations and a few major “must sees” and let the maps and books take us from there!

Day 2 we followed the signs, way off the path, but found a castle (this happens a lot in Ireland). 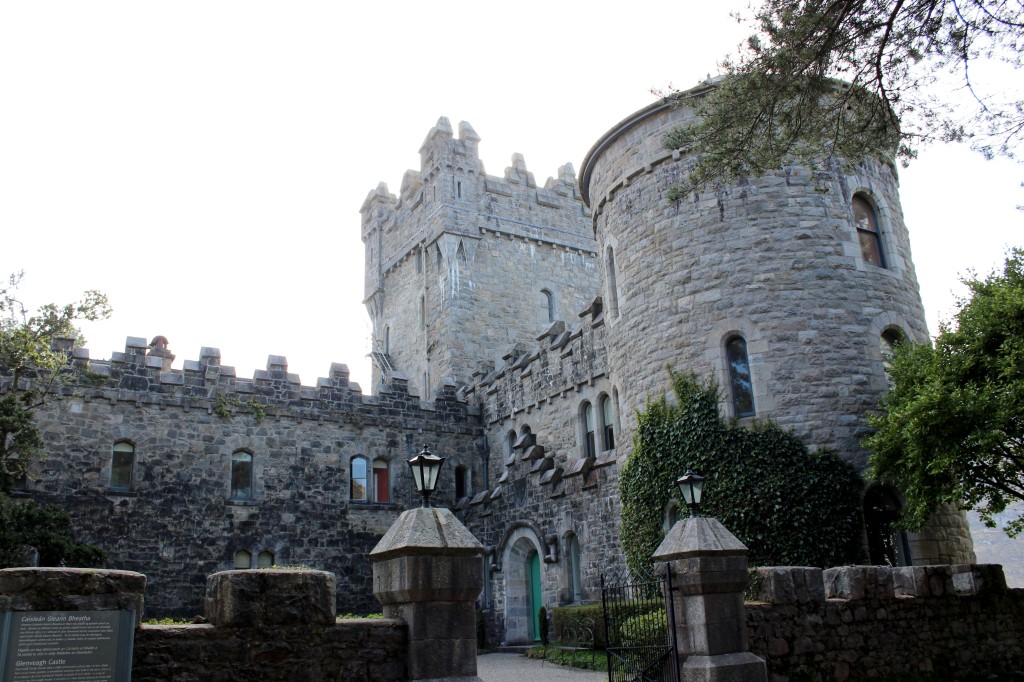 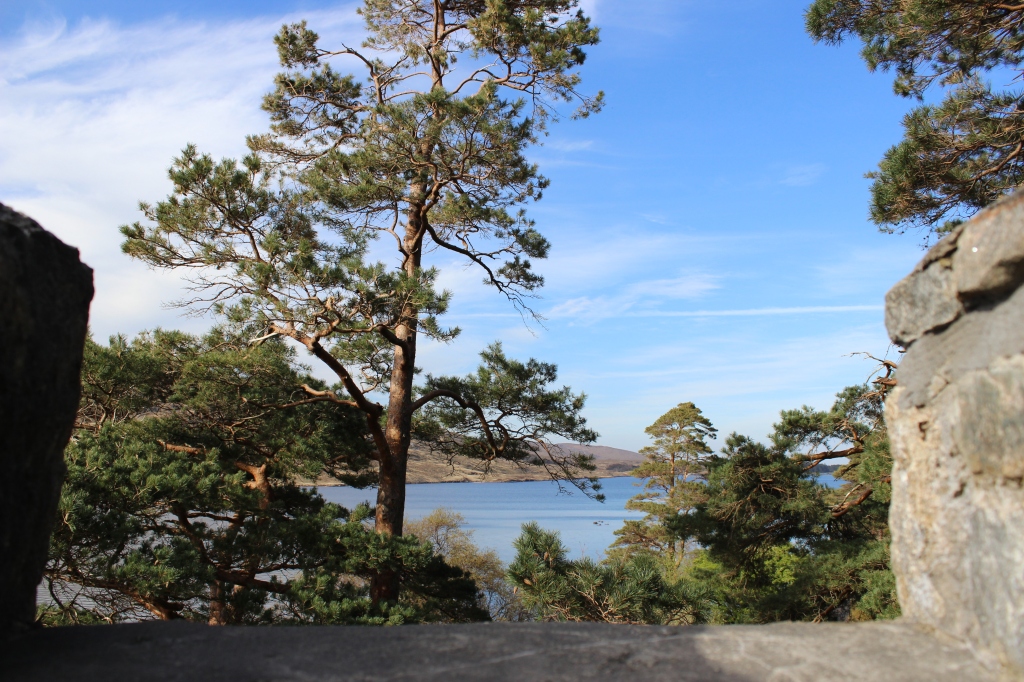 Before we took this detour, we were headed to Galway but honestly, I am so glad we got sidetracked. Touring a castle and it’s grounds with nothing but countryside around it is really something to behold.

Now, while our second night’s accomodations were a little difficult to come by, they were my favorite (and every single one of our hosts were fantastic).

Ross House, ran back then by Nicholas and Oriel was a lovely covnerted farmhouse in the town of Ross in Sligo. We were greeted warmly by Oriel who, even at 9pm, led us into the living room where Nicholas was sitting. She offered us the traditional tea and biscuits but also noted we hadn’t eaten supper so she made us a frozen pizza while Nicholas (in is tweed pants and wool sweater) told us stories. Minus the frozen pizza, this was the Ireland I was waiting for ❤ 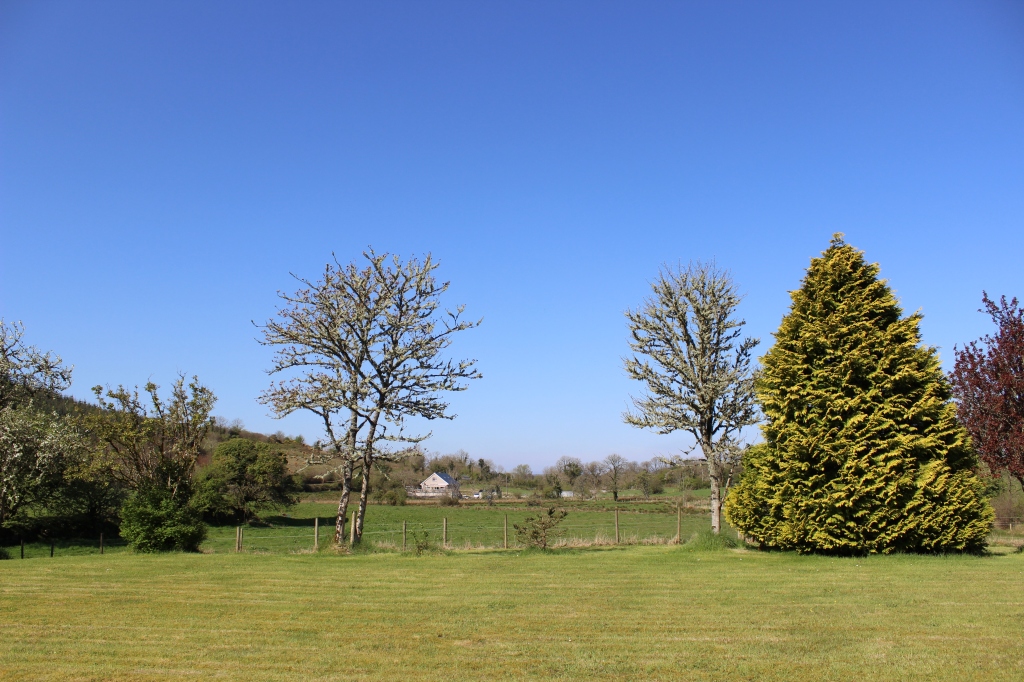 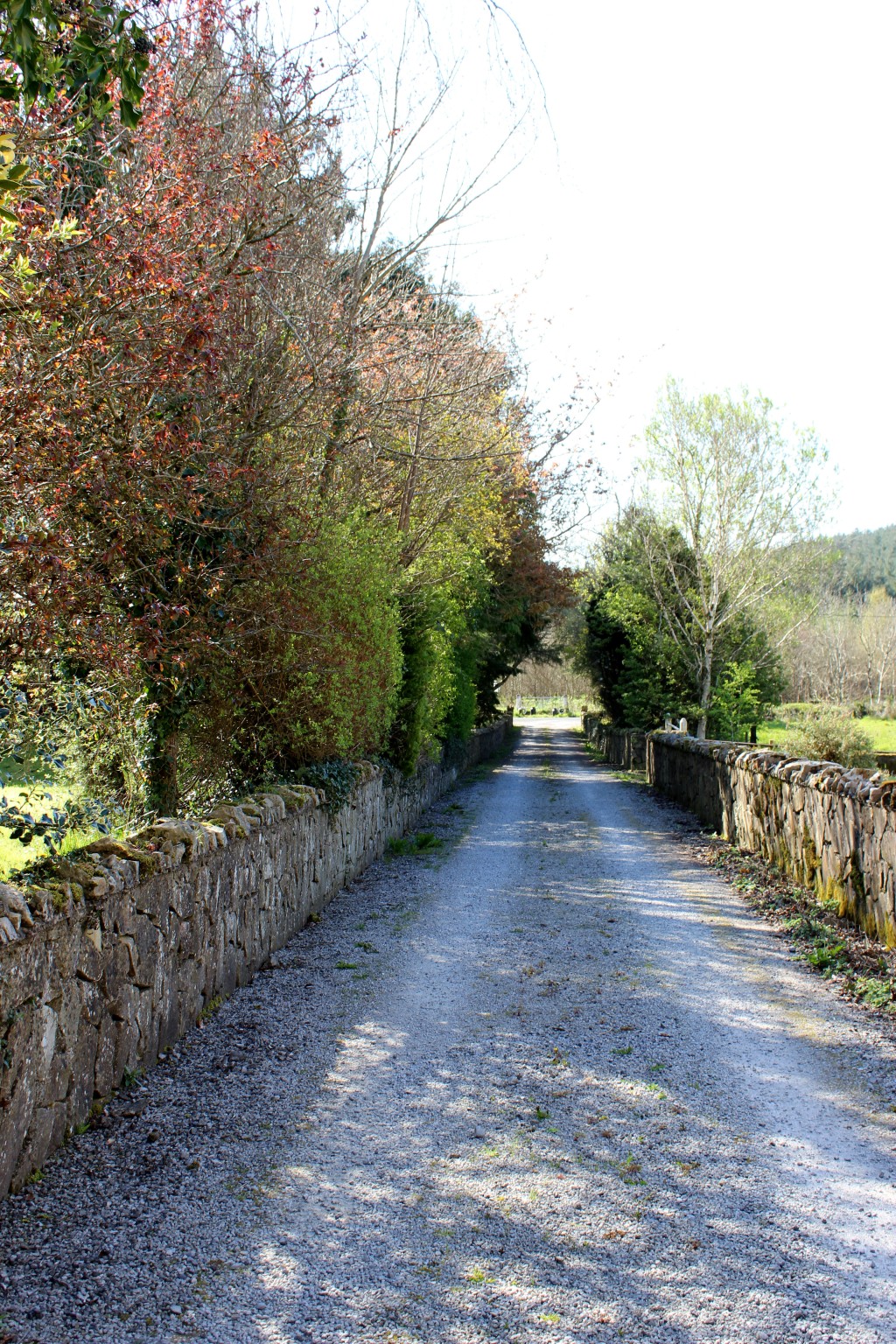 I really hated to leave Nicholas and Oriel, so was very pleased when they invited us to attend church with them that morning. It’s the most memorable Easter Sunday I have had in a very long time. I, sadly, don’t have any photos of the old stone church but it was lovely!

As we did with Belfast, we popped in and out of Galway city. Ashley had heard about The Quays Bar, so we found it, had lunch and drove right back out! I’ll say this, once you get use to wide open, the cities can be overwhelming, especially if you don’t have much time there!

On the way to Doolin, our stop for the night, we passed THE castle I had purchased a photo of from a friend years earlier…so we had to stop and capture it too!

Doolin was probably my favorite B&B location of the trip. The Ashford Lodge was set slightly uphill and facing Galway Bay. The view from our guestroom was spectacular!

We drove just down the hill to Fitzgerald’s Pub and had another incredible meal of she crab claws, seafood pie (like shephard’s pie only seafood) and boxty!!! Delish!!

Day 4, after another amazing breakfast, we took an early morning ferry to one of the Aran Islands. Inis Orr, which included a look at the cliff face of the Cliffs of Moher. 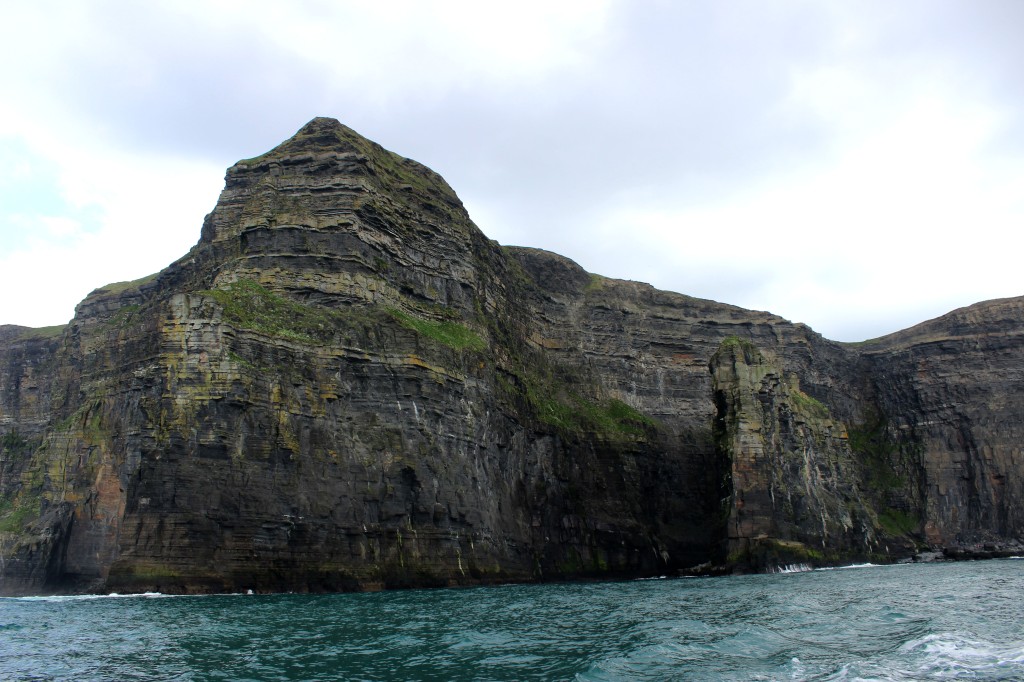 From Doolin, we drove onto a ferry and over to Tralee, where we got to Maureen’s B&B in plenty of time to be warmly greeted by John and Maureen, freshen up and get directions to a place to have dinner. 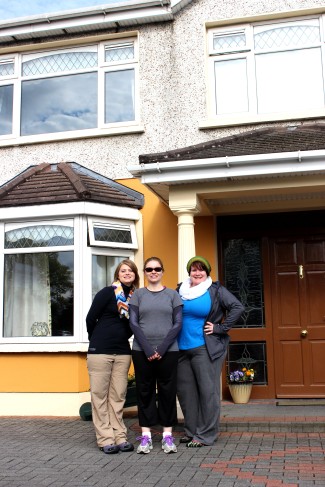 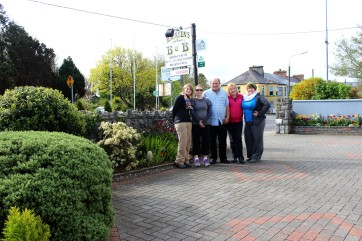 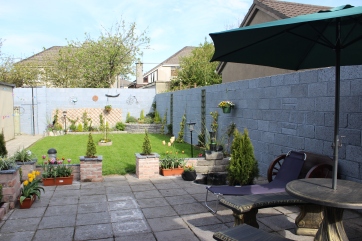 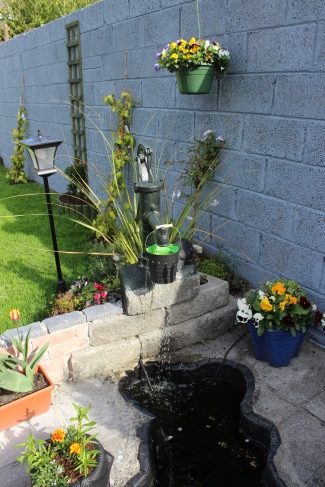 At this point in the journey we get even sadder to leave so quickly because we realized that Irish hospitality really shines after you’ve finished breakfast and the host(s) come in a visit with you for a while. We just start getting to know then when we have to leave 😦

From Tralee we head and explore the Dingle Peninsula. 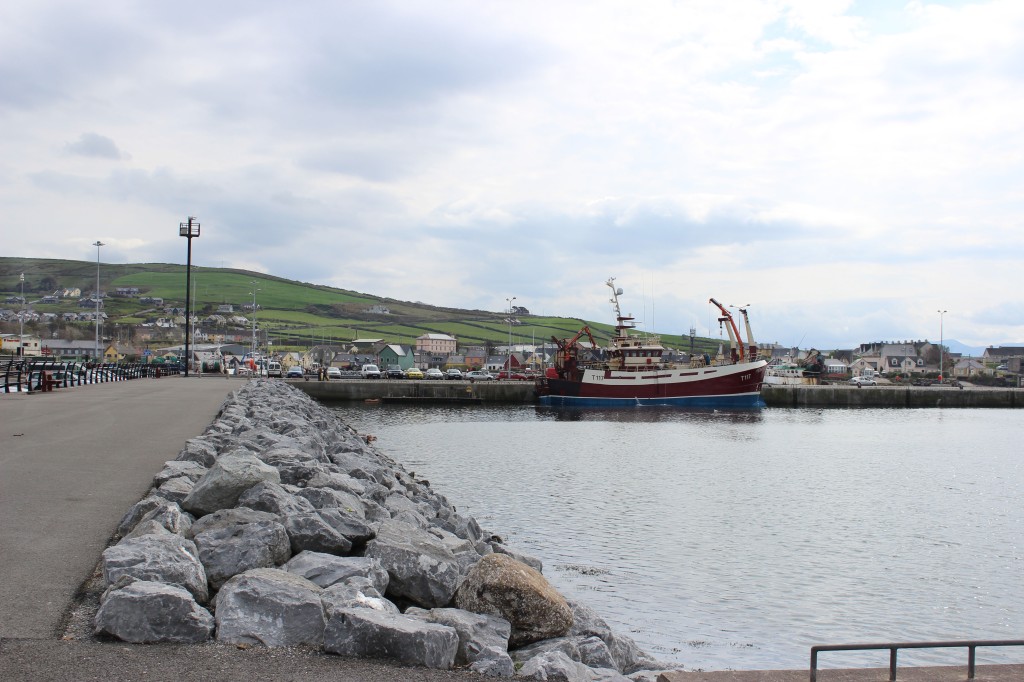 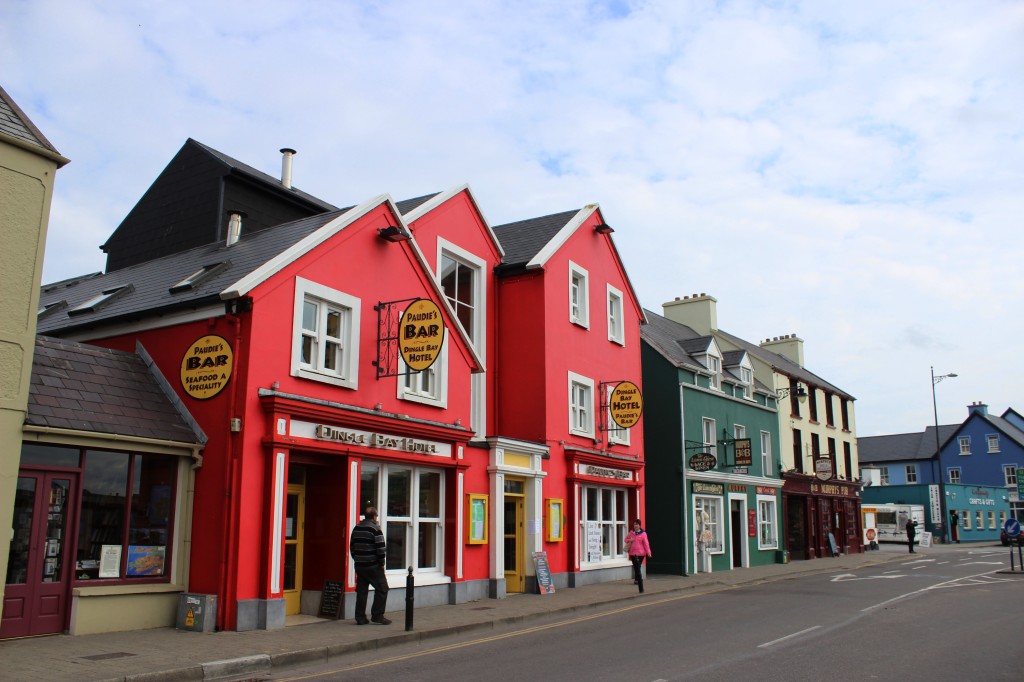 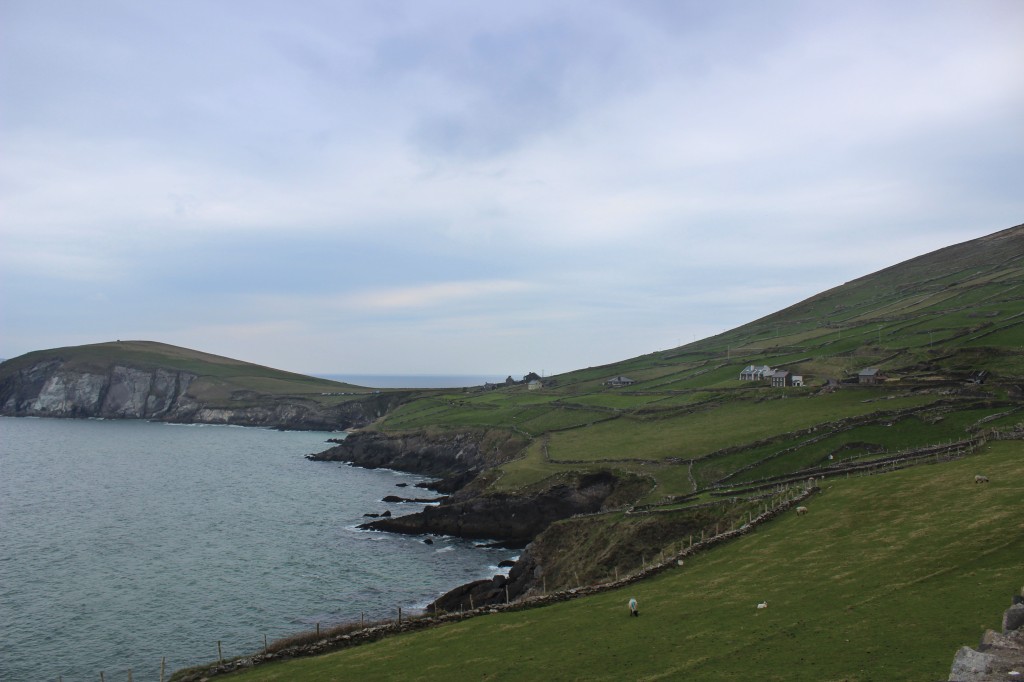 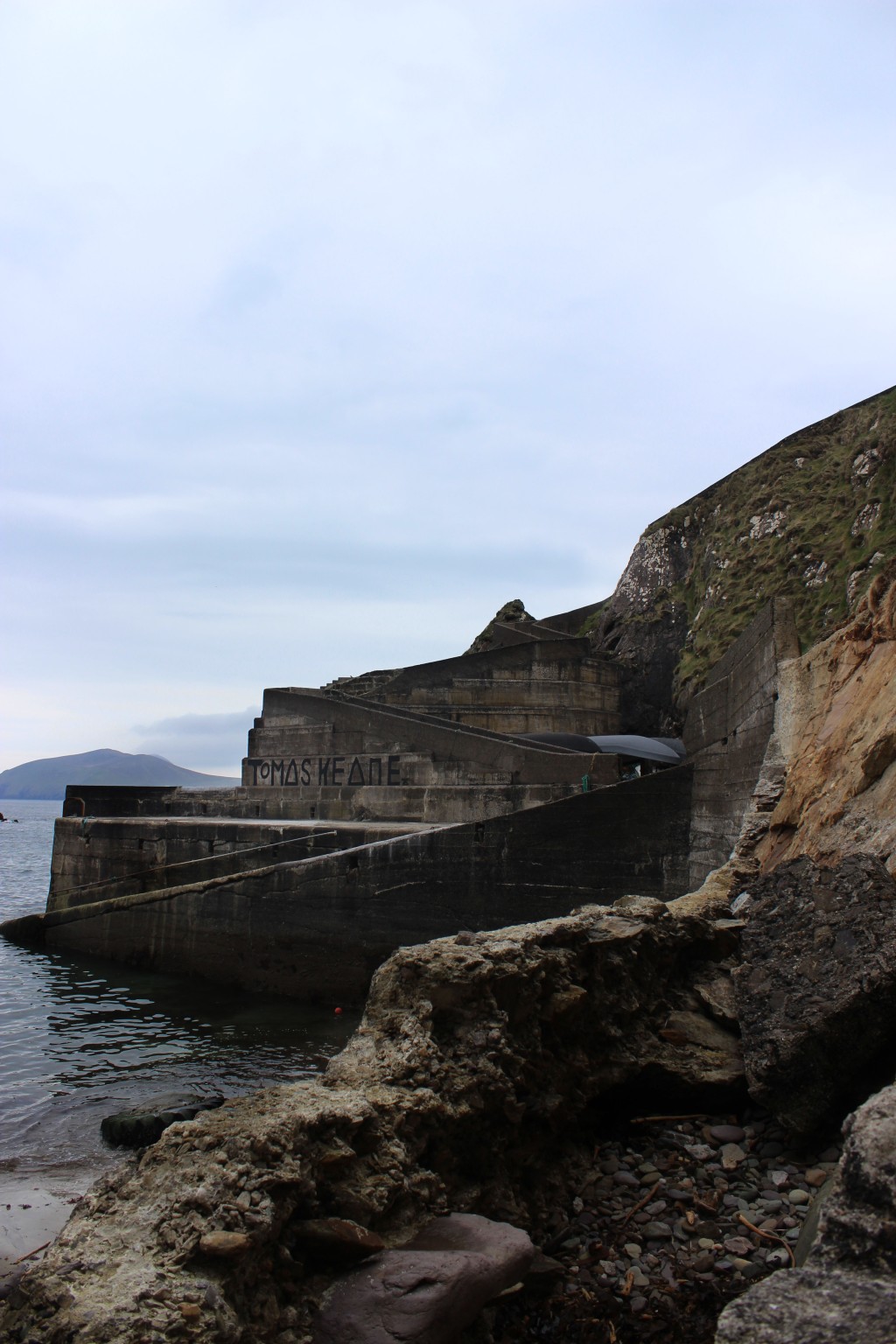 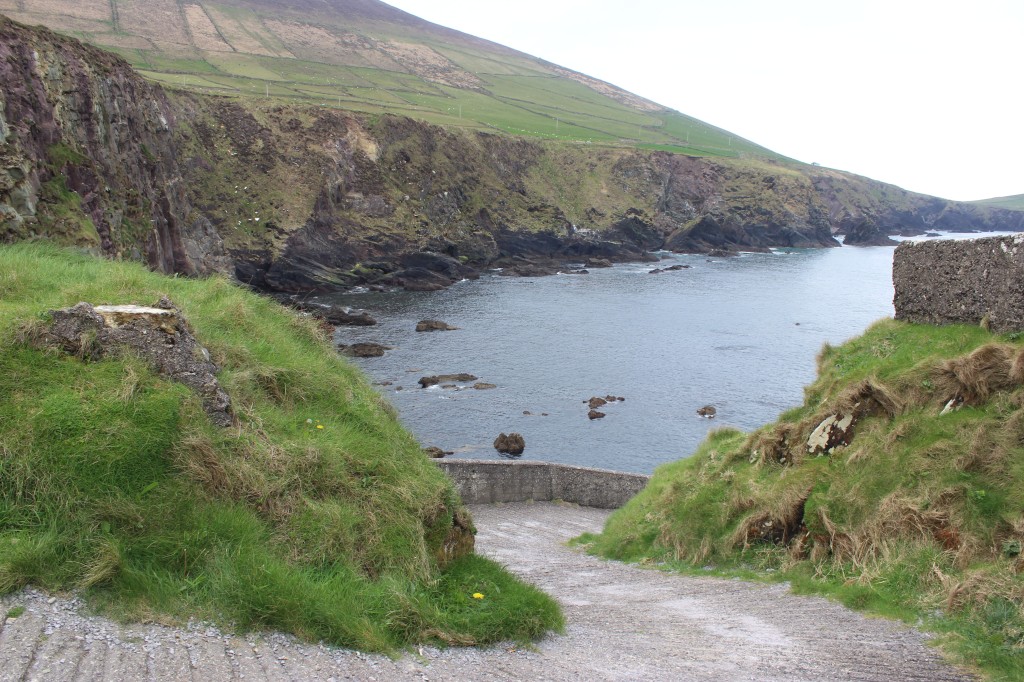 Dingle is lovely! After walking a few blocks, getting some locally famous ice cream and shopping a bit, we drove around the rest of the area, which being seaside, is a beautiful as you can imagine.

I think I should tell you here that we were told all week that Ireland was having an unseasonably rainless week that week. This was one of the only days it was even overcast and that didn’t last long! We were blessed! 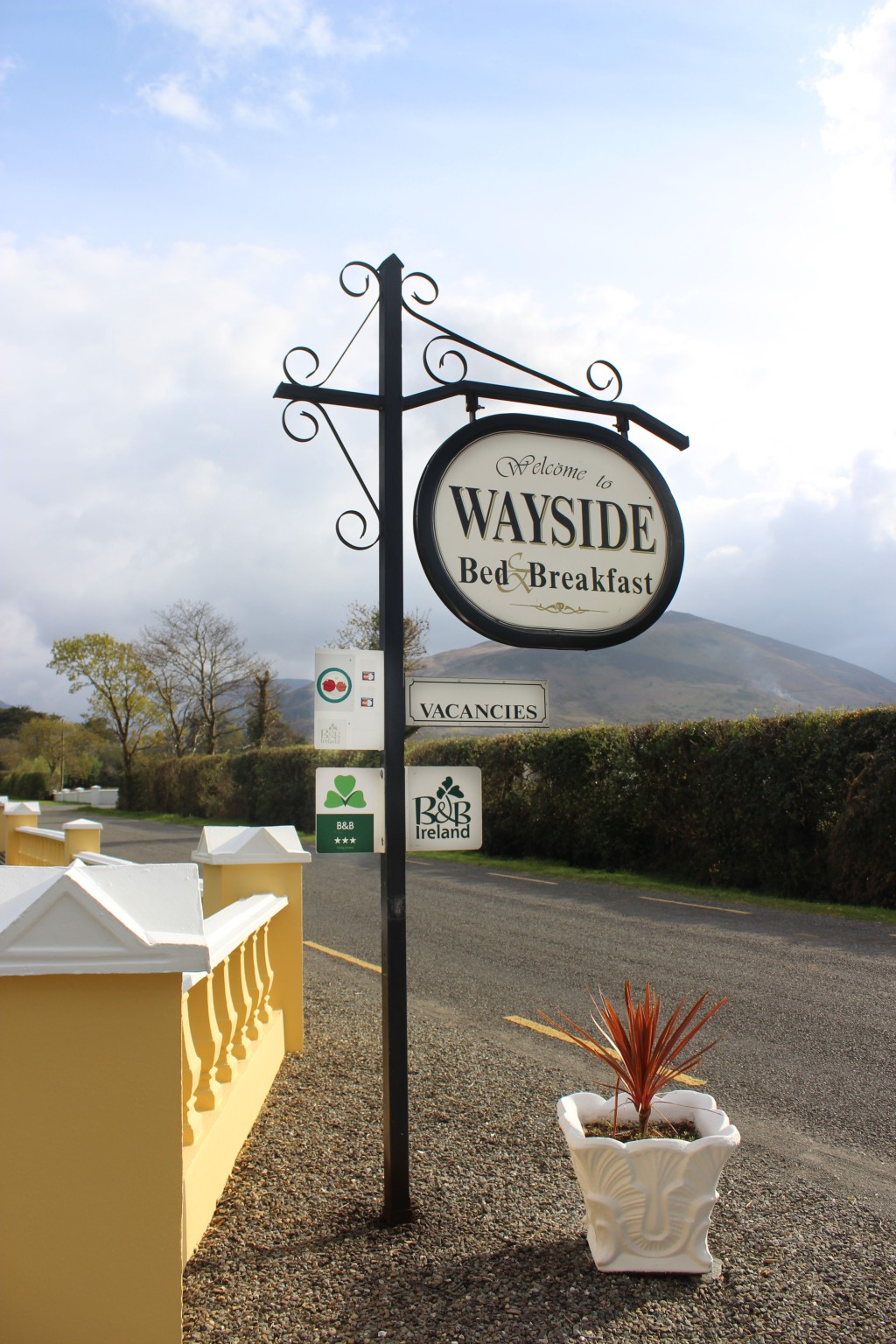 We pulled in to Wayside the earliest we had made it anywhere, yet, at about 5:30 and were excited to get a lay of the land, freshen up and head to dinner.

Theresa was a wonderful hostess and came out the patio with tea, local maps and a few recommendations for a meal!

Wayside is situated just before the Gap of Dunloe and at it’s entry is a little square that had both a pub and a café. We got dressed up and enjoyed an evening with a slower pace and some live music!

The next morning, after a huge breakfast, we hiked one of the trails in the Gap, where it rained on us for the first time, and then followed the hike up with a BLT/soup and cup of tea at The Coffee Pot.

We finished the day off with a drive around the Ring of Kerry, which sadly, we didn’t have time to get out and explore much of BUT it was another beautiful drive and this time we could see the surf and a few golf courses along the way!

Day 6 ended at Mount View B&B in Cobh, where we, again, pulled in early enough to freshen up and take a lovely walk to dinner, along the port. 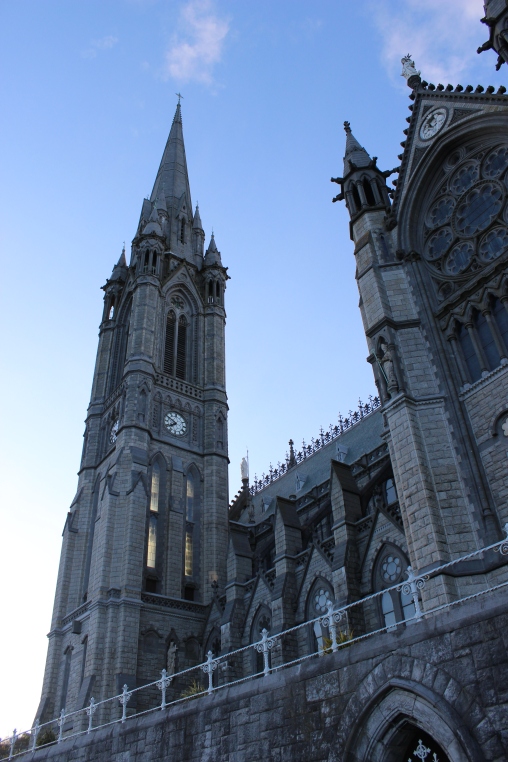 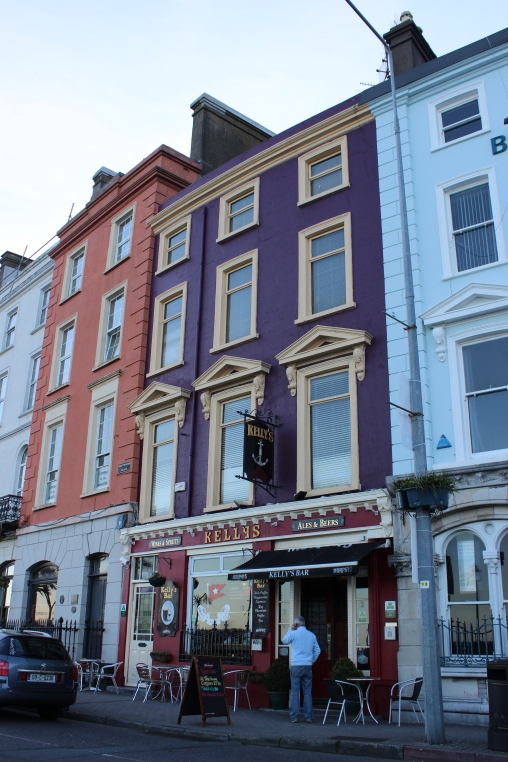 I think this is the only dinner where we opted for a Malbec instead of more stout! As with ALL the rest of the cuisine, it was delicious. 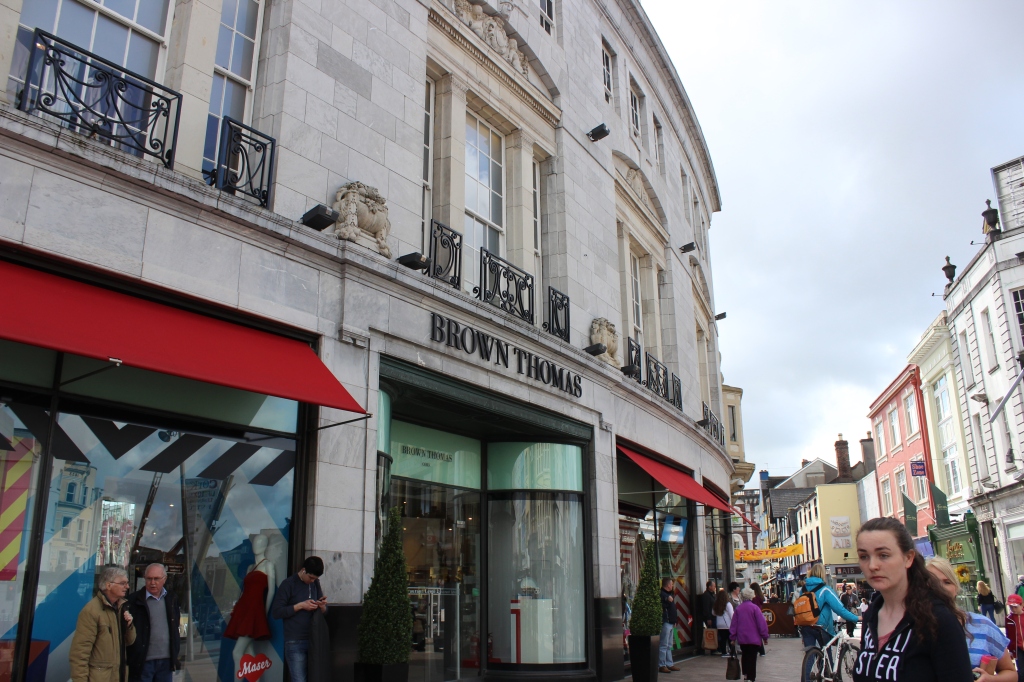 It’s Day 7 and after another, truly lovely, chat with our hostess Noureen, we headed for a morning of shopping in the city of Cork. 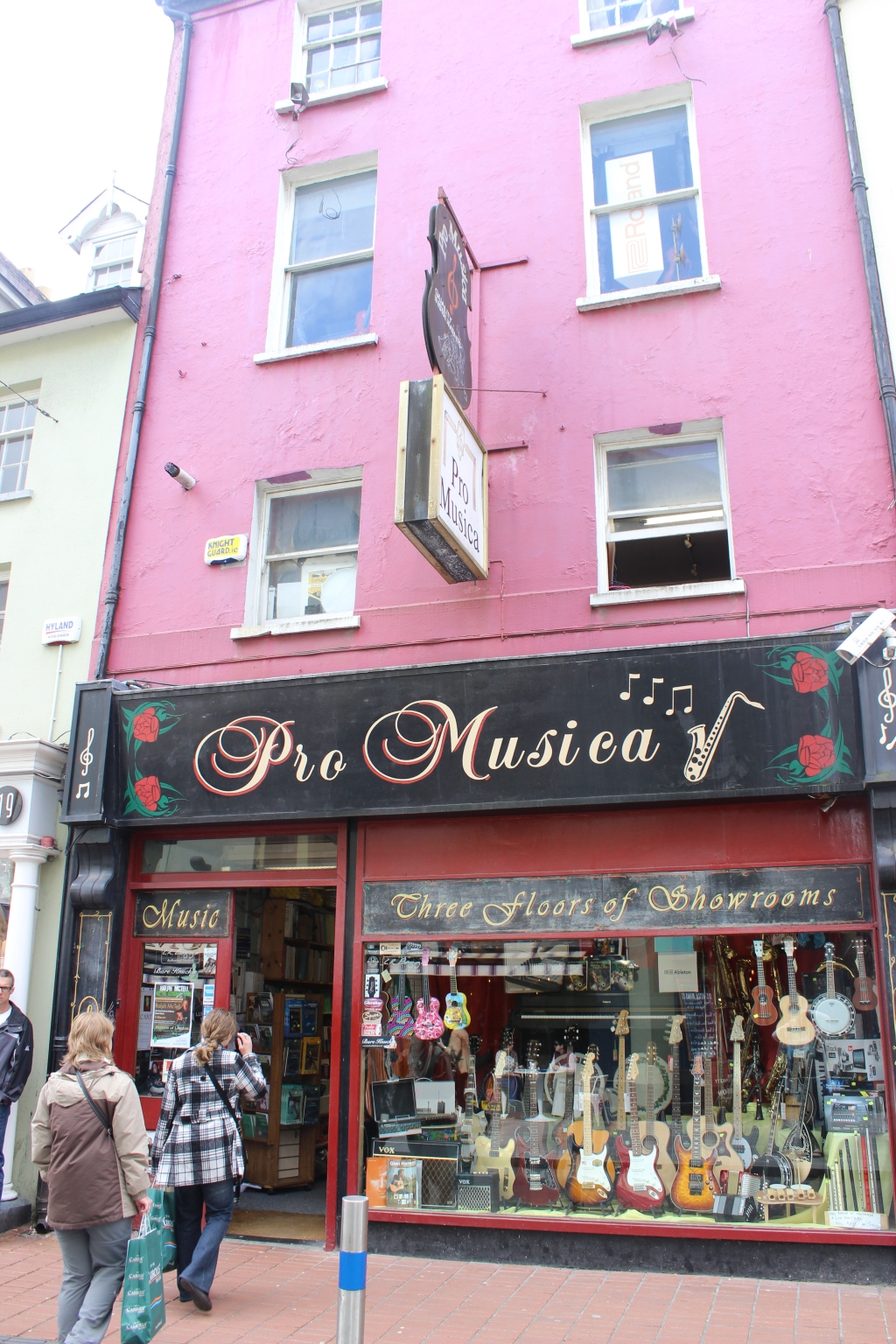 Cork is a shoppers paradise. There are streets and alleys full of unique shops and stores.

And by mid-day (and mid-trip), I had talked about getting a tattoo so much that my friends challenged me to go into the next parlor we passed or stop talking about it!!!

You see which one I chose and I do not regret it because I would have never done it otherwise and I now have 4, very special, tattoos!!

Sadly, the rest of the trip is a bit of a whirlwind! I think it took us about 5 hours to get to our last accommodation, in Swordes, just above Dublin, and we got there just as our host family was pulling out for dinner. Luckily, we were still early enough to wander down the street and find one last pub to eat at. We sat along the wall and enjoyed one last pint and fish/chips before we fell into bed…

We had to be up earlier than they served breakfast the next morning but thankfully and kindly, Sharon had made us up a basket of goodies for the road!!

There is SO much I left out but the important stuff is all here and in my heart. So many times in my journal, I remark on the gratitude of finally getting to make it to Ireland and for being able to share it with my friends.

And I’ll tell you one more thing…not only are we still friends, great friends…we’ve been on many more adventures together! Stay tuned!!

← February’s Tangled Web
A May Day →

2 Comments on “My Dream Trip ~ Ireland”